From the Daily Wrap-up by AP:

Chesson Hadley moved a step closer to his first PGA TOUR victory in seven years, opening a four-stroke lead over Harris English and six over Dustin Johnson on Sunday in the rain-delayed Palmetto Championship at Congaree.

Hadley, English, Johnson and Lee Tain were all on the 18th hole when the horn sounded to stop play because of lightning. Rain followed about 10 minutes later and officials waited more than two hours for things to clear before telling the players they had to return to finish Sunday morning.  Read more

Chesson Hadley had missed 10 of his last 12 cuts coming into this week. He was 192nd in Strokes Gained: Tee-to-Green, 151st in the FedExCup, 320th in the world.

Only his putting, in which he ranked 14th on TOUR, seemed to be going right. The best thing he’d done was take some time away from the game to preserve his sanity.

And yet it will be Hadley, and not his third-round playing partner, world No. 1 Dustin Johnson, who will go into Sunday with the best chance to win the Palmetto Championship at Congaree.  Read more

From Sky Sports by Keith Jackson:

Chesson Hadley will begin the final round of the Palmetto Championship with a four-shot lead over Harris English, with world No 1 Dustin Johnson seven shots off the pace after a disappointing 73

Dustin Johnson slipped seven shots off the pace as Chesson Hadley opened up a commanding lead after the delayed third round at the Palmetto Championship.  Read more

From CBC.ca, Round recap:

Chesson Hadley finished off his third round Sunday morning, shooting a 68 for a four-stroke lead at the rain-delayed Palmetto Championship.

Hadley was among four players who couldn't complete the 18th hole at Congaree on Saturday as lightning and severe storms hit the area. Hadley closed with a par to stand at 14-under 199, four ahead of Harris English.  Read more

How to Watch the Palmetto 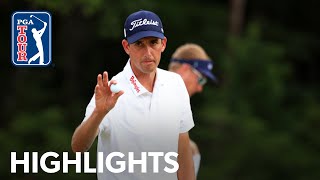