A two-way tie atop the leaderboard in the Pelican Women’s Championship presented by Konica Minolta and Raymond James has set the stage for an epic final-round showdown on Sunday at Pelican Golf Club in Belleair, Fla.

Rolex Rankings No. 1 and Bradenton, Fla. native Nelly Korda recorded eight birdies on Saturday for a 7-under par 63. Eleven-time LPGA Tour champion Lexi Thompson found her way to six birdies to shoot a third-round 65. The two Americans are tied for the 54-hole lead at 16-under, overall.  Read more

BELLEAIR, Fla. (AP) —  Nelly Korda started with two birdies and finished the same way Saturday, making up plenty of ground along the way for a 7-under 63 that gave her a share of the lead with Lexi Thompson in the Pelican Women's Championship.

Low scores ruled the day again at Pelican Golf Club, with 10 rounds at 65 or better.

Thompson did her part with a 65 that allowed her to join Korda at 16-under 194 with no shortage of contenders right behind them heading into the final round.  Read more 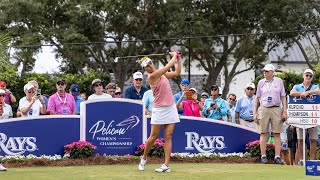