Cameron Champ fended off dehydration and crisply putted his way to a 5-under 66 on Sunday, winning the 3M Open by two strokes for his third career PGA TOUR victory.

The 26-year-old Champ had five birdies in a bogey-free round to finish at 15-under 269 at TPC Twin Cities. Louis Oosthuizen, Jhonattan Vegas and Charl Schwartzel tied for second.

Cameron Champ has worked hard of late on finding the proper balance in his search to enjoy life both inside and outside the gallery ropes, taking great measures to relax more with golf club in hand and appreciate the game while not being so hard on himself when poor rounds and tournaments pile up...

Looking nothing like the angry golfer who hadn’t had a top-10 finish this year and had missed four cuts and withdrew from another tournament in five starts before tying for 11th in the John Deere Classic two weeks ago, Champ weathered one and all storms at hot TPC Twin Cities to win his third PGA Tour title.  Read more

From Twin Cities, by Jace Frederick:

Whatever Champ was searching for, he found it this week. A 5-under 66, highlighted by a stuck wedge on the 72nd hole, powered Champ to his third career PGA Tour victory Sunday, winning the 3M Open by two shots at 15 under.

Champ held off the likes of Jhonny Vegas, Louis Oosthuizen and Charl Schwartzel, who all tied for second at 13 under. Keith Mitchell finished solo fifth at 12 under. 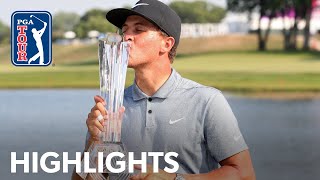