How the final day of the Presidents Cup played out at Royal Melbourne between the Internationals and USA.

HOW THE FINAL DAY OF THE PRESIDENTS CUP UNFOLDED AT ROYAL MELBOURNE:

- With seven birdies in 15 holes, Woods put the Internationals' previously unbeaten spearhead to the sword in a typically ruthless captain's display from the 15-times major champion. The perfect start which the US had to make.

- Johnson was never threatened after going three up through five holes, the former world No.1 consigning Cup rookie Li to the dubious place in the history books as the only International player not to contribute even half a point at the 2019 edition.

- In an ironic twist, golf's Public Enemy No.1 put the US in front for the first time since Thursday morning with the most comprehensive victory of the day. Beaten in his previous three matches this week. Reed got off to a flyer, racing to six up through seven holes before a gallant fightback from Pan briefly reduced the lead to two. But a birdie at the 16th settled the issue.

- In a heartbreaker, Matsuyama was four up with eight holes to go only for Finau to win four successive holes from the 11th to 14th to turn the pivotal encounter around. Matsuyama will be kicking himself for also three-putting the 17th having regained the lead a hole earlier to gift the US a priceless half point.

- In a game display after overcoming a bout of food poisoning, Hadwin never led all day and was two down through five holes before producing a tenacious fightback to claim half a point. The Canadian squared it up with a pressure birdie on the penultimate hole.

- Cantlay won three straight holes from the fourth to the sixth to go from one down to two up only for Niemann to hit the lead with successive birdies on nine and 10. Not to be denied, Cantlay steadied to regain the lead for the US with a hot run of four more birdies in five holes to slam the door shut on the Cup's youngest player.

- Schauffele started on fire, going five under through seven holes. But Scott rallied gamely, bombing two 13-metre putts to raise hopes of a miracle comeback win. The Australian No.1 eventually conceded on the 17th.

- Having gone winless in his previous three matches paired up with Reed, Simpson earned his first point with a relatively comfortable victory. Simpson was never headed after taking the second hole and had An dormie three before effectively giving the US match point.

- A magnificent performance from Australia's Cup rookie, fighting back doggedly after three birdies in the first four holes gave Thomas a big early lead. Smith completed the comeback with a birdie on the 17th to inflict Thomas with his first defeat of the week and keep the Internationals' hopes of a tie flickering.

- With a none-from-four Presidents Cup singles record entering the penultimate match of the day, Kuchar finished an unlikely American hero after tapping in a two-metre birdie putt at the 17th to confirm the US victory. Kuchar had been three down at the turn before salvaging the critical half point.

- The result ultimately didn't matter but the Internationals' still had hope of sharing the Cup until the 16th hole. Leishman made a great start, going two up after five holes but he needed a birdie on the last to salvage a honourable draw after Fowler made him grind all afternoon. 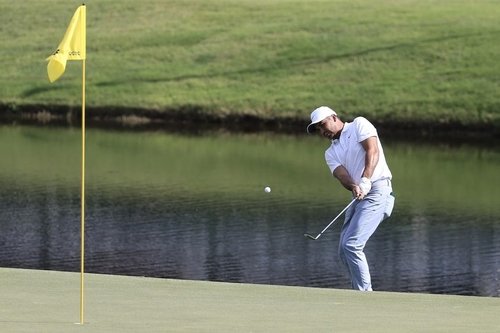