RSM Classic, Day One: Sebastian Munoz' round of 60, leads by one on day of low scores

Sweet conditions on Day One: A round of 60 delivers Munoz a one shot lead

Scoring was so low Thursday at Sea Island that all that got Munoz was a one-shot lead. The Colombian, who won his first PGA TOUR event just over two years ago, birdied his final hole at Seaside.

He led by one stroke over Sea Island member Zach Johnson at Seaside, while three other players were one shot behind. Past champion Mackenzie Hughes, Chez Reavie and Scott Stallings each had a 9-under 63 on the Plantation course.  Read more

From Golf Australia, by AP:

Scoring in the first round of the PGA Tour's RSM Classic in Georgia was so low that in-form Queenslander Cameron Smith shot a six-under 66 and ended the day only tied 21st.

Conditions were so ideal at Sea Island on Thursday that 33 players shot 66 or lower on the two courses, located just off the Atlantic Ocean, and all but 21 players in the field of 156 broke par.  Read more

If you shot even par on Thursday at the RSM Classic, you have almost no hope of making it to the weekend in the last PGA Tour tournament of 2021.

Two courses are used for the first two rounds of this event, and both played well under par during Round 1. The average score at the Seaside Course — where leader Sebastian Munoz played his round and shot 10-under 60 — was 66.31, and the average score at the Plantation Course was 68.7. The Seaside number of 66.31 is the second-lowest scoring average on a single course in a single round on the Tour since 1983.  Read more

From Yahoo!Sports, by Rex Hoggard:

ST. SIMONS ISLAND, Ga. – For those making their first start at the RSM Classic, Thursday’s Chamber-of-Commerce edition was, at best, misleading and, at worst, an outright lie.

Clear skies and a gentle warm breeze welcomed the field to Sea Island Resort, which is almost always a call for the game’s best to start aiming for every flag. The predictable scoring assault started quickly....

But it seems as if the fun is over.

It just wasn’t a perfectly warm day in November that led to Thursday’s scoring assault. Friday’s forecast calls for wind gusts to 30 mph and much colder conditions. Because of the two-course rotation, that means officials had to set both courses up for what was expected on Friday, not Thursday.  Read more 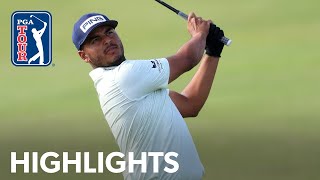