Ryder Cup: Shane Lowry, Sergio Garcia and Ian Poulter are on the team

Ryder Cup, Harrington Decides: Lowry, Garcia and Poulter are on the team

From Yahoo!Sports, by Mercer Baggs:

Garcia and Poulter weren’t surprises as Harrington said earlier this summer, “Sergio almost has to lose a limb to avoid being selected and Poulter is not far behind.”

The ultimate decision seemed to come down to Lowry or Justin Rose. Read more

Offaly native Lowry was left sweating on receiving the call after failing to secure the top-eight finish he required in the BMW PGA Championship to grab an automatic spot.

The 2019 Open champion has described the call-up on Twitter as "the proudest day of my career so far."  Read more

From The Courier UK, by Steve Scott:

[Harrington, of Lowry] “He is a rookie but we don’t think of him that way,” he said. “He’s a major champion, he’s won a WGC event, and he’ll be a great partner and team mate.”

“I’m thrilled at my team,” said Harrington. “They match up superbly. I’m not hiding any players. They could all play in every match.”  Read more

Rose eagled the 18th in a final round of 65 to finish in a tie for sixth, but that was not enough.

“It was incredibly difficult with JR,” Harrington said. “Clearly he was in contention in his last two events.

“Did I need more? Maybe not but the fact of the matter is, with who he was going up against, the consistency of Shane Lowry, what Ian and Shane have brought over the years, somebody had to lose out.

“It really is as close as that. Alex Noren as well playing fantastic golf."  Read more 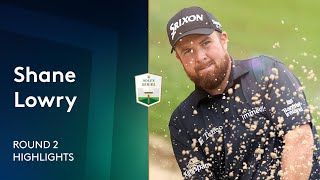