Spain’s Carlota Ciganda and New Zealand’s Lydia Ko are tied at the top at the end of the first day of the Aramco Saudi Ladies International presented by Public Investment Fund.

After a delay to the first round because of morning fog, play got under way one hour later than planned at Royal Greens Golf & Country Club.

And it was world number seven Ko, who began her round on the 10th tee, who took advantage of the morning conditions carding six birdies and one bogey for a round of 67 (-5) to post the best score.  Read more

From The West Australian, by Ian Chadband for AAP:

New Zealand's former world No.1 Lydia Ko has made a superb start to the Saudi Ladies International while Australia's major-winning star Minjee Lee got off to a stuttering opening at the Royal Greens Golf and Country Club...

With Stephanie Kyriacou, a leading light on the LET also going round in 73, the Australian challenge was being spearheaded by 30-year-old Western Australian Whitney Hillier, whose two-under 70 left her in joint eighth place.  Read more

Lydia Ko and Carlota Ciganda hold a share of the lead after the opening round of the Ladies European Tour’s Aramco Saudi Ladies International.

Ko carded four birdies in a five-hole stretch around the turn on her way to an opening-round 67 at Royal Greens Golf & Country Club, seeing her set the clubhouse target, only for Ciganda to join her on five under after mixing seven birdies with two bogeys during her first round.  Read more 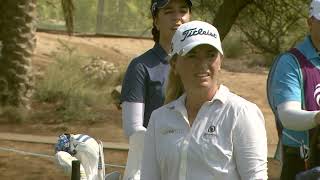