Webb Simpson has birdied five of his closing seven holes to claim a one-shot win at the PGA Tour's tightly-contested RBC Heritage in South Carolina.

Webb Simpson has celebrated another victory on Father's Day, this time with a tartan jacket instead of a US Open trophy, as he stormed home to win the PGA Tour's RBC Heritage.

In a wild sprint to the finish after a three-hour storm delay, Simpson ran off five birdies in his closing seven holes at Harbour Town to card a 7-under 64 and a one- one-shot victory.

Simpson won the US Open at Olympic Club in 2012 but the traditional Father's Day finish for the major was moved back to September this year because of the COVID-19 pandemic.

On a soft course where scoring was low, Simpson set a tournament record at 22-under 262 to secure his second win of the year and to move to the top of the FedEx Cup standings.

"I didn't get it going until 12 and then the putts started going in and I started getting confident. It's amazing to be standing here right now."

It was a tough runner-up finish for Abraham Ancer, who hit all 18 greens in regulation on his way to a 65.

Daniel Berger, last week's winner at Colonial, chipped in for birdie on the 17th to close with a 65 and finish in a share of third at 20-under with England's Tyrrell Hatton (66).

Sergio Garcia and Joaquin Niemann both had rounds of 65 to share fifth at 19-under while Brooke Koepka matched their score to finish seventh a shot further back.

Dylan Frittelli had the low score of the week, his 62 on Sunday put him in the clubhouse lead before the final groups even teed off.

The South African had to settle for a share of eighth in a six-man group that included Justin Thomas (63) and Bryson DeChambeau (66).

World No.1 Rory McIlroy closed with a 70 and tied for 41st while Australian Matt Jones slid to 52nd with an even-par 71. 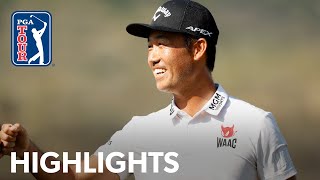 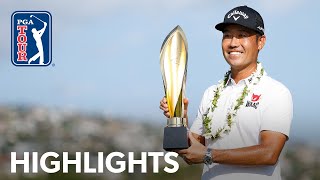