From PGA TOUR, by Kevin Prise:

During a practice round ahead of this week’s Sony Open in Hawaii, PGA TOUR Champions pro Jim Furyk was addressed by playing partner Brent Grant with the deferential ‘sir’ formality.

Grant, 25, then asked Furyk, 51, what he liked most about his early career on the 50-and-older circuit.

Grant was born in March 1996, a month after Furyk's first Sony Open victory, carding 11-under total and besting Brad Faxon in a playoff for his second PGA TOUR title.  Read more

Kevin Na's 61 leads after Round 1 with Jim Furyk a shot back at Waialae Na started strong Thursday as he tries to go back-to-back at Waialae Country Club.

The first round of play at the Sony Open is complete, and the same player who led at the last iteration of this tournament leads again after 18 holes of play this year.

Kevin Na followed his win at Waialae Country Club in 2021 with a 61 in Round 1 on Thursday and leads Russell Henley (no surprise) and Jim Furyk (big surprise!) by one stroke early in the event.  Read more

Jim Furyk won the Sony Open in 1996 at 25 years old and now 26 years later, in Round 1 of the same event, he turned back the clock in a big way while playing on a sponsor's exemption.

Despite starting his first PGA Tour round since March 2021 three-putting for bogey, the 51-year-old turned in a front-nine 32 with four birdies and didn't stop there. Furyk sank a 25-foot birdie putt – identical to what he did on No. 5 – on the par-4 16th to get within one of the lead, but he put the cherry on top of his round just moments later.  Read more 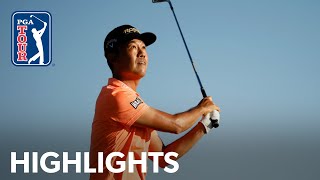