HONOLULU — Russell Henley made a series of key putts late in his round Saturday and salvaged a 3-under 67 that gave him a two-shot lead over Masters champion Hideki Matsuyama in the Sony Open in Hawaii.

Matsuyama made up plenty of ground with a 63, taking only 25 putts even if he had no idea how some of them went in. He caught up with Henley briefly by closing with a 15-foot birdie putt.  Read more

From PGA TOUR by Ben Everill:

HONOLULU – Hideki Matsuyama was wondering how Russell Henley feels sleeping on a lead after the Masters champion surged towards the top in the third round at the Sony Open in Hawaii.

But he didn’t expect as honest an answer to come from the American himself.

“It’s tough. I’ve slept on a few leads the last couple years. It’s hard. I struggle to sleep. I'm already not the best sleeper,” Henley admitted after a grinding 3-under 67 left him 18-under at Waialae Country Club, good enough to be two ahead of Matsuyama.  Read more

Russell Henley fired five birdies in a three-under par 67 on Saturday to stay atop the leaderboard at the Sony Open, where Masters champion Hideki Matsuyama was two shots back.

Henley, who won the first of his three US PGA titles in his tour debut at the Sony Open in 2013, couldn't match the fireworks of Friday at Waialae Country Club.  Read more 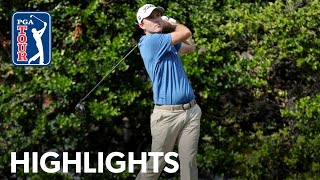