Team Europe at the Ryder Cup 2021: a closer look

From the Independent.ie, by Phil Casey:

Europe will attempt to retain the Ryder Cup against the United States at Whistling Straits in Wisconsin.

Here, we look at the 12 players in captain Padraig Harrington's side for the biennial contest from September 24-26.  Read more

At the Independent link above, Phil Casey takes a closer look at each of the players on Team Europe.  These include the automatic qualifiers, Jon Rahm, Viktor Hovland, Tommy Fleetwood, Paul Casey, Tyrrell Hatton, Rory McIlroy, Lee Westwood, Matt Fitzpatrick and Bernd Wiesberger, and the wildcards Ian Poulter, Sergio Garcia and Shane Lowry.

The European team contains nine automatic qualifiers and three captain's picks which were announced by Harrington following the BMW PGA Championship. There is plenty of experience in the team to face a youthful American line-up which contains six rookies, with Team Europe largely consisting of the 'old guard' although there are three newcomers.  Read background info on every team member, and more 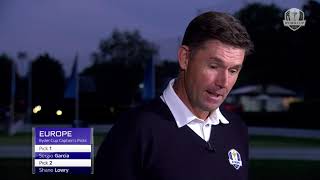