The 149th Open at Royal St George's: Day One

Day One at The Open

Gallery of Images of the Day, from Golf Australia

Jordan Spieth rolled in putts like it was 2017. Louis Oosthuizen put those runner-up finishes in the last two majors out of mind and soared to the top of the leaderboard.

They gave The 149th Open Championship a familiar feel on Thursday.

The roars and cheers of the biggest golf crowd since the pandemic rumbled around this quirky course off Sandwich Bay, just like pre-COVID times.  Read more

From The West Australian, by Ian Chadband:

There was no Shark-like attack on the leaderboard but Cameron Smith was a lonely terrier as he fought his way to the only under-par score by an Australian on the opening day of the 149th British Open Golf Championship at Royal St George's.

After all the upbeat talk about this perhaps being the year another Aussie might at last follow Greg Norman by supping from the Claret Jug after a 28-year drought, even Smith was left nonplussed by the toothless start from the 11-strong contingent.  Read more

From SportsNet, by AP:

The majors finally had a degree of normalcy Thursday at Royal St. George's. Louis Oosthuizen and Jordan Spieth leading the way at the British Open felt pretty familiar, too.

Canada's Mackenzie Hughes shot a 4-under 66 Thursday to sit just two shots off the lead. Adam Hadwin, Corey Conners and Richard T. Lee round out the rest of the Canadian field at The Open Championship.  Read more

The Covid pandemic has been crushing for everyone. But within the confines of Royal St George's, as The Open got under way, Steve Carroll remembered what life used to be like.

It began as a murmur on the tee, the noise rising to a crescendo as Jon Rahm’s birdie putt hit the bottom of the cup on the sixth hole.

The cheer that emanated out of that grandstand, and from the hundreds who’d perched on the Maiden – the huge dune that looks down over the green – left me with a frog in my throat.  Read more

The British Open returned on Thursday for the first time in two years, with 32,000 fans at Royal St. George's enjoying the action.

AFP Sport looks at the best of the players' soundbites after the first round of the 149th Open Championship:

"For other events you sort of drag yourself out of bed and look like the Kellogg's man. Today actually wasn't too bad. You've always got a buzz to come and play The Open."  Read more 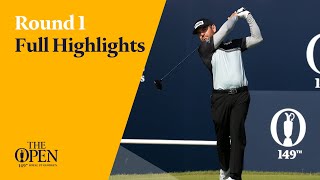