The Charles Schwab Challenge at Fort Worth

From The First Look, by Adam Stanley:

FIELD NOTES: After a missed cut at the PGA Championship, Scheffler, who has won four times this season, is back in action.  Read more

From Yahoo!Sports, by Rex Hoggard:

FORT WORTH, Texas – Players were given maroon-colored ribbons to wear this week at the Charles Schwab Challenge to honor the victims of Tuesday’s school shooting in Uvalde, Texas.  Read more

From the Belfast Telegraph, by Phil Casey:

Justin Thomas has put the celebrations of his “unfathomable” US PGA Championship triumph on hold for another week.

Thomas lifted the Wanamaker Trophy for a second time on Sunday, defeating fellow American Will Zalatoris in a three-hole aggregate play-off after the pair had finished tied on five under par at Southern Hills.  Read more

From Yahoo!Sports, by Ryan Lavner:

Alabama football coach Nick Saban has a 24-hour rule to celebrate his successes or mourn his defeats.

Thomas is back to work this week at the Charles Schwab Challenge, just a few days after he authored a stirring comeback to win the PGA Championship.  Read more

Five of the world’s top 10 are taking part at Colonial Country Club this week but does history suggest they’re ready to shine when playing straight after the PGA Championship?

Much is made of how the top golfers perform the week before a Major championship.

Is there a danger that they could peak too early? Would they be better taking the week off and getting to the Major venue early.  Read more

Colonial CC at Fort Worth 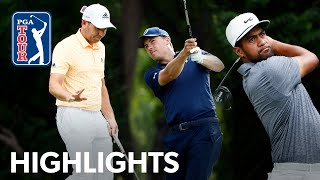