Day Three: Lee Hodges (from US) and Paul Barjon (from France) lead into final

LA QUINTA, Calif. — Lee Hodges and Paul Barjon took advantage of a late tee time Saturday to miss the worst of a windy day and share the third-round lead in The American Express...

Playing together in the final group off the 10th tee on PGA West's Stadium Course, the PGA TOUR rookies and close friends each birdied the par-5 fifth, par-4 seventh and par-5 eighth and closed with a par.

“We’re just best buddies and we have a great time out there,” Hodges said. “We keep it really light and it’s easy to compete when your friends are playing well.”

Hodges, a 26-year-old former Alabama golfer, shot an 8-under 64. Barjon, the 29-year-old Frenchman who played at Texas Christian, had a 65.  Read more

Both playing together on the Stadium Course, Hodges fired an 8-under 64 and Barjon 65 to share the lead at 18 under overall heading into Sunday's final round. Hodges rose 11 spots while Barjon jumped seven spots.

Six players are bunched in a tie for fifth, three shots back at 15 under.  Read more

From the Desert Sun, by Larry Bohannan:

Tom Hoge and Seamus Power have played well enough through three rounds of The American Express to be among the leaders at the tournament. But both Hoge and Power know they may have let a better chance at winning the tournament slip away Saturday afternoon.

With Hoge leading at 17 under and Power at 16 under in the clubhouse, they could only watch as Paul Barjon and Lee Hodges shot low scores on the tougher Pete Dye Stadium Course at PGA West on a breezy day to pass them up.  Read more 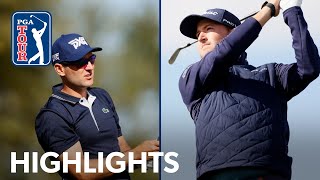