Day Two: Cantlay one in front; Zalatoris among the chasing pack two strokes back

LA QUINTA, Calif. — Patrick Cantlay fought through gusting wind on his back nine Friday to take a one-stroke lead into the weekend at The American Express in a bid to win for the third time in four starts.

Tied for the first-round lead with Lee Hodges after a 10-under 62 at La Quinta Country Club, Cantlay shot a 68 on PGA West’s Nicklaus Tournament Course to reach 14-under 130.

“I actually putted really well today and made nothing,” Cantlay said. “The greens were a little beat up and it was hard to make putts. But I rolled it really well and I rolled it how I wanted to, I just didn’t get any to go in.”

Tom Hoge was second after a 66 on PGA West’s Stadium Course.

“I really felt fortunate that we got through 17 holes without the wind really coming up,” Hoge said. “Just our last hole there it got gusting.”...

Will Zalatoris birdied his last seven holes on the Nicklaus layout for a 61 to also join Cameron Young (68), Lanto Griffin (65) and Greyson Sigg (67) at 12 under.   Read more 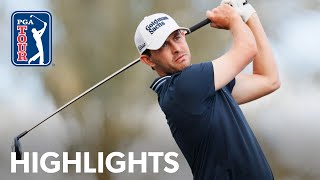