Last year the Pro-Am was not held at the American Express, due to pandemic conditions. A Charity Challenge was played out instead. The Challenge was emcee'd by tournament host Phil Mickelson, with Tony Finau and Paul Casey having major roles.

Cameron Morfit described it at the time:

This year the pro-am returns.

The three-day Official Pro-Am is the only Pro-Am on the PGA TOUR where you play with six PGA TOUR players over three days on three world-class golf courses at PGA West Stadium Course, Nicklaus Tournament Course, and La Quinta Country Club. Each foursome consists of two amateurs and two PGA TOUR Professionals all three days, amateur twosomes will remain together for all three days. The top 3-gross and top 3-net winners will make the cut and play again on Sunday for the Pro-Am Championship!  Read more 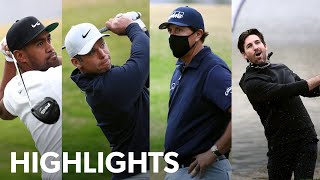