Kim, Cantlay, Rahm and Mickelson are among those with their eyes on the prize at La Quinta

We say Mahalo! to Hawaii, as the American Express (formerly the Desert Classic) is about to get underway back in California.

Last year Cam Smith finished third at La Quinta, 20-under, just three shots behind that of winner Si Woo Kim. This year, after his record breaking effort at Kapalua, Cam won't be among the Am-Ex players. Nor will Matt Jones, who also broke records at Kapalua. In fact there are only two Aussies in the field: Jason Day and Brett Drewitt.

Last season’s FedExCup champion Patrick Cantlay and world No. 1 Jon Rahm lead the field at The American Express, as the PGA TOUR returns to the mainland United States after two weeks in Hawaii.

Si Woo Kim, who bested Cantlay by one stroke in 2021, returns to defend.

FIELD NOTES: Patrick Cantlay shot a course-record 61 in the final round a year ago but ultimately fell one shot short of Si Woo Kim’s winning total. He’s back and hoping to lift the trophy … 2018 American Express winner Jon Rahm returns to action … Tournament host and reigning PGA Championship winner Phil Mickelson is set to tee it up.  Read more

COURSE: The American Express is set to return to play at three courses for 2021 after utilizing just two last year for the first time in tournament history.

Yardages are subject to change. 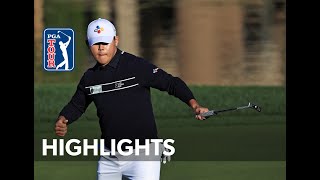