The Fastest Hole in Golf - The Hero Challenge 2021

How fast can four golfers play a 501-yard par five at Valderrama?

Five years on from our original attempt on the same hole at the same course, we’re back for the second Hero Challenge of 2021.

With 27.88 seconds to beat, we tasked Sean Crocker, Nicolai Højgaard, Wilco Nienaber and Min Woo Lee with breaking the ridiculously tough Guinness World Records title for the Fastest hole of golf by a team of four.  Read more

From Essentially Sports, by Ishita Bhargava:

Five years ago, a Guinness world record was set for the ‘fastest hole of golf by a team of four. This month, at the same course and hole, four European Tour golfers attempted to break that record at the Hero Challenge 2021.

The attempt took place on the 4 hole at the Real Club Valderrama golf course in Sotogrande, Cadiz, Spain. Sean Crocker (US), Min Woo Lee (Australia), Wilco Nienaber, (South Africa) and Nicolai Højgaard (Denmark) were the four who took on the challenge on October 12, 2021.  Read more

From Golf Magic, by Matt Chivers:

Filmed on Tuesday, October 12, 2021, ahead of the Estrella Damm N.A. Andalucía Masters, Crocker, Hojgaard, Lee and Nienaber were challenged with attempting to better the extremely demanding existing record of 27.88 seconds, set by an American team in 2018.  Read more 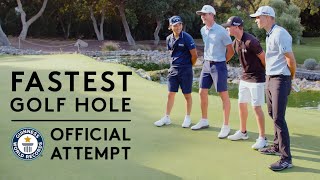