The Historic Last Train to Georgia

As the eyes of the golfing world turn to Augusta, PGA TOUR players begin their last tournament chance to gain entry.

The Texas Open dates back 99 years, having first been held in 1922. It is "the oldest Professional Golf Tour tournament to have been held in the same city its entire existence. Every tournament has been played in San Antonio, Texas" - See Valero Texas Open History.  Also from that link, the Texas Open is "the fifth oldest professional [golf] tournament in North America" and the third oldest on the PGA TOUR, after the Western Open and the Canadian Open.

The host course for the tournament is the AT&T Oaks course at the TPC San Antonio. It has been held here since 2010. A beautiful video of the course is available at that link.

From Golf Experiences:
"Norman’s design philosophy is underscored by environmental sensitivity and a deep reverence for nature. Great care has been taken to incorporate the distinct nuances and indigenous flora of the natural Hill Country topography into the course design.."

(Title is a cap-tip to Jim Weatherly who left us in February, writer of this song.) 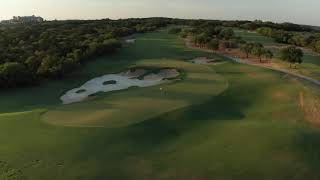