The Masters 2021 Round 1: Rory McIlroy's Worst First Round, but "All is Not Lost"

The Masters at Augusta National 2021 - Round One

“I'm just at the start of a journey here that I know will get me back to where I want to be,” Rory said earlier in the week.

With that understanding in mind, "All is not lost" for Rory, despite ending the day with his worst first round score ever.

From Rex Hoggard at Golf Channel:

The byproduct of [McIlroy's] uncertainty was an opening 76 and a share of 62nd place, out of 88 players, when he completed his round. It was the worst opening round of his career at Augusta National and his worst start at a major since the 2019 Open Championship. But if you’re looking for a disgruntled golfer, Rory’s not your guy...

...Struggling golfers rarely want to “keep going.” Most are more than happy to be off the course, but that’s not where McIlroy is at the moment. Few in the game at this level are as adapt at turning lemons into lemonade and a scrappy opening day, even at the tournament that means the most to him at this juncture in his career, is no reason to question himself.

As he explained earlier this week, the journey is going to take some time to get back to where he once was as the world’s top-ranked golfer and a regular contender at major championships. He also explained that there will be bumps along the way. Day’s like Thursday when a game that once seemed so easy is a non-stop struggle.

There was no better example of this than on the seventh hole.

McIlroy fans who are feeling downhearted should read Hoggard's All is not lost in full.  It does help :)

About that 7th hole, in case you missed it:

That's Rory's dad, Gerry, being thwacked in the leg by his son's wayward golf ball.
As he limped away, Gerry quipped, "I should ask for an autographed glove."
Rory's reply,  “I think he just needs to go and put some ice on. Maybe I’ll autograph a bag of frozen peas for him.”

Since then, McIlroy is being advised to take a complete break from golf for a while.

“I think the best thing for Rory is a few weeks in the sunshine on a beach somewhere and clear his head. Sometimes the harder you try at this game the harder it gets, no matter how talented you are.”  - Paul McGinley, former Ryder Cup Captain.

“I agree with what Paul said – a couple of weeks off down in the Bahamas with the family, just relax, get away from golf and then come back with a fresh outlook."  - Butch Harmon, Tiger Woods' former coach. 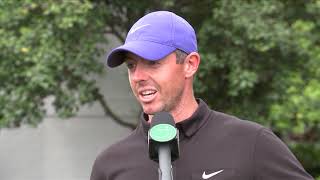