The Players Championship Round one: Quadruple bogey wipe-out for defending champ McIlroy

The Players Championship at TPC Sawgrass 2021 - Round One

From Ben Everill of PGA TOUR:

Rory McIlroy got to keep the coveted gold PLAYERS Championship trophy for two years thanks to the COVID-19 pandemic enforced cancellation at TPC Sawgrass a year ago, but the 2019 champion won’t be getting it back in 2021.

The two-time FedExCup winner was a dejected figure as he signed for a 7-over 79 in the opening round – his career worst round at THE PLAYERS. Previously McIlroy’s hardest trip around TPC Sawgrass was a 77 in his first PLAYERS Championship in 2009 as a 20-year-old.

To add insult to injury McIlroy was paired with fellow former champion Sergio Garcia as the Spaniard paced the morning wave with a 7-under 65 – besting his Ryder Cup teammate by 14 shots.

Despite perfect conditions the damage was done on the opening nine holes as the group started on the 10th tee. McIlroy snapped his opening tee shot left into an unplayable lie, he ended up making double bogey, and things just got worse from there.  Full story here 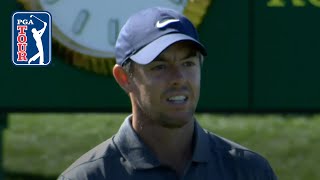