When Jon Rahm, with a six shot lead, suddenly had to withdraw from the Memorial Tournament

In front of thousands of spectators, and several cameras beaming vision to a global audience, Jon Rahm couldn’t help but instantly slump towards the ground on Sunday when he learnt his six-shot lead at the Memorial Tournament meant nothing.

A COVID-19 diagnosis erased his lead, one of the great rounds in the tournament’s history (eight-under, 64) and his chance for a sixth PGA Tour title.  Read more

From AFP via Fox Sports:

Rahm had tested negative for four consecutive days only to return a positive test from a sample collected Saturday morning, after he made an ace at the par-3 16th in concluding his darkness-halted second round with a two-shot lead.  Read more

From the PGA TOUR Statement:

Rahm is now in isolation, and in accordance with CDC guidelines, he will need to remain in isolation through Tuesday, June 15.

While this is an incredibly unfortunate situation, throughout 50 events since the PGA TOUR’s Return to Golf, there have been only four positive tests (including Rahm) within competition; Rahm is the first positive, asymptomatic case as part of the TOUR’s routine, contact-tracing protocols.  Read more

This is one of those things that happen in life, one of those moments where how we respond to a setback defines us as people. I am very thankful that my family and I are all OK.  Read more 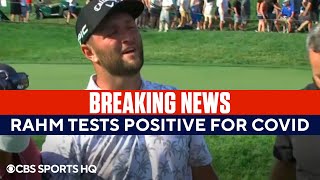