Tasmanian Simon Hawkes has taken out the Oates Vic Open Championship while Western Australian Minjee Lee has won the  Womens Oates Vic Open for the second time, this time as a professional.

Hawkes tied with Harrison Endycott (NSW) before the playoff,  finishing 14-under on 274.  Anthony Quayle and Cory Crawford, both from Queensland, tied for third followed by Ben Eccles and Steven Jeffress on 5th.

Simon Hawkes had not previously secured a world ranking point so for him, this event is life-changing.   He rises to the top of the ISPS HANDA PGA Tour of Australasia Order of Merit and will now head off to Perth for the European Tour and Asian Tour.

“I'm just flabbergasted right now, I kind of knew that I was playing well coming into the week.”  - Simon Hawkes

When she received the trophy in 2014 Minjee Lee became the world No. 1 ranked womens amateur golfer, remaining there until she turned professional. She has previously had three LPGA victories but this is her first in Australia as a professional.

“I don’t think I’ve won at home since the Vic Open so it’s really nice to win in Australia again,”  - Minjee Lee.

Runner up for the Womens Oates Vic Open is 19 year old Queenslander Karis Davidson on 71. This is her first tour as a professional. Hannah Green and Georgia Hall tied for third place. 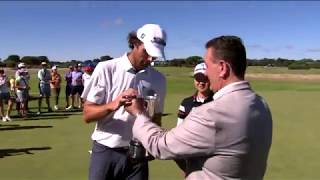