22 year old South Korean Jin Young Ko finished Round One of the 2018 Women's Australian Open at the top of the leaderboard on 7-under-par 65.  Last year she won the 2017 LPGA KEB HanaBank Championship and she tied 15th at the US Womens Open. This is her first year as a member of the LPGA Tour.

In second place at 5-under on 67 is Jiyai Shin, also from South Korea, who won the Canberra Classic last week. In 2013 Shin won the Women's Australian Open, which was held at the Royal Canberra that year.

Ten players are tying for third place on 4-under-par. They include Lydia Ko, Nelly Korda, Luna Soborn Glames and Mo Martin. Hannah Green on 3-under is the most securely placed Australian. 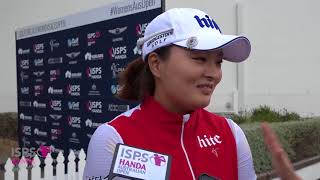