At the end of the second round of the 2018 Women's Australian Open at Kooyonga Golf Club in Adelaide, Jin Young Ko remains in the lead with 10-under-par and Emma Talley (US) just three shots behind her on 7-under. Jiyai Shin is tied on third with Sun Young Yoo, also from South Korea, both on 6-under, followed by Japan's Nasa Hataoka.

Jin Young Ko said she had two keys to her golf, which she applied during this round.

She also said that she is using some of what she had learned from the experience of playing her winning game at the LPGA KEB HanaBank Championship last year.

23 year old Emma Talley won at last year's Symetra Tour. This is the first time she has been close to the lead in an LPGA Tour. She is following Ko steadily at just three shots behind, through both rounds of this year's Women's Australian Open.

“Yesterday my short game was unbelievable and I kind of kept it going all day.  Today I hit the ball really well and my driver was back to normal today and my irons were really good,” Talley said of her second round. 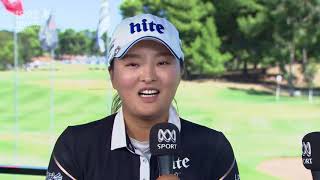