It’s just a fact. Emma Talley leads the field, male or female, after two rounds in Northern Ireland for the inaugural ISPS Handa World Invitational at 13-under overall. With nine birdies on Friday, the University of Alabama alumna scorched Massereene Golf Club en route to a 7-under 65 and three-stroke lead over Chella Choi and Jennifer Kupcho.

With all the circles on her scorecard, a three-putt bogey on No. 2 lit the fire for Talley’s strong finish to an impressive day.  Read more

Daniel Hillier carded a stunning round of 62 to take a one shot lead into the weekend at the 2021 ISPS HANDA World Invitational presented by Modest! Golf Management.

The New Zealander is playing just his seventh European Tour event and arrived in Northern Ireland this week with no playing privileges on the European Tour or Challenge Tour.

But the 23-year-old made a mockery of that status, beating his lowest round on Tour by four shots at Galgorm Castle Golf Club to get to 11 under and lead the way from England's Jordan Smith... Read more

Hillier had jumped into top spot by firing a round-of-the-day 62 at Galgorm Castle, seeing the New Zealander move to 11 under, with English pair Garrick Porteous and David Horsey three off the pace in tied-third...

Emma Talley mixed nine birdies with two bogeys on her way to a seven-under 65 at Massereene Golf Club, taking the American to 13 under and moving her three clear of compatriot Jennifer Kupcho and Korean Chella Choi.  Read more 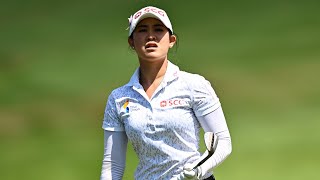