McIlroy regains the lead, heading into final round

Rory McIlroy will take a one shot lead into the final round of the 2021 DP World Tour Championship, Dubai as he looks to make it a hat-trick of victories at Jumeirah Golf Estates.

The Northern Irishman carded a 67 on day three over the Earth Course to get to 14 under and put himself in pole position to claim a first Rolex Series victory and become the only player to win the Race to Dubai season finale three times.  Read more

Rory McIlroy regained the lead at the DP World Tour Championship in Dubai after a third round of 67 put him one ahead of England's Sam Horsfield. McIlroy carded seven birdies on Saturday to finish the day on 14 under...

Race to Dubai leader and Open champion Collin Morikawa is on 11 under in a group which includes Shane Lowry.  Read more

From the Irish Golf Desk, by Brian Keogh:

Rory McIlroy insists he's right where he wants to be after he escaped disaster at the 17th, then birdied the last to take a one-stroke lead into the final round of the DP World Tour Championship in Dubai.  Read more

From the Daily Mail UK:

DUBAI, United Arab Emirates (AP) - Rory McIlroy was on the rocks late in his third round at the DP World Tour Championship.

Some cliff-edge improvisation, followed by a final-hole birdie, put him back in control.

Seeking a second straight victory to end his season, McIlroy delivered another wild finish at Jumeirah Golf Estates in shooting a 5-under 67 that left the four-time major champion with a one-stroke lead on Saturday.  Read more

Rory McIlroy will take a one shot lead into the final round of the DP World Tour Championship, Dubai after producing another dramatic finish in an entertaining round of 67.

The four-time Major Champion, who is aiming to become the first three-time winner of the event, dropped a shot on the first but then rattled off six birdies in the next 12 holes to return to the top of the leaderboard in the final Rolex Series event of 2021.  Read more 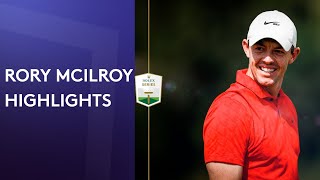