Yuka Saso birdied the third playoff hole to beat Nasa Hataoka on Sunday and become the second teenager to win the U.S. Women’s Open after Lexi Thompson collapsed down the stretch.

Saso overcame back-to-back double bogeys early in the round to make the playoff. She then won it with a 10-foot putt on the ninth hole to become the first player from the Philippines to win a golf major.

And there may have been no cheer louder than when Yuka Saso, at just 19 years of age, rolled in her 12-foot birdie putt on the third playoff hole to win the 76th U.S. Women’s Open.

“I feel great,” she said. “I’m so thankful for everyone who’s supporting me.”

When Saso woke up this morning, she was greeted by a notification on her phone. Rory McIlroy — Saso’s golfing idol — had tagged her in a post.

“Great playing the last few days,” it read. “Go finish it today and get that [trophy].”  Read more here 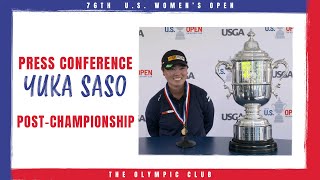