Doing Australia proud in Round One of The 150th Open: Cameron Smith, Brad Kennedy, Min Woo Lee and Lucas Herbert

As Day One at The 150th Open begins to wrap up, Cameron Smith is presently solo third on the leaderboard, having fired his best opening round yet at an Open Championship, 5-under 67.  As well, he achieved that while hampered by a dodgy knee!  Meanwhile Brad Kennedy is just a shot back, 4-under 68, T4; Min Woo Lee 3-under 69, T11, and Lucas Herbert one shot back again.

Top of the Leaderboard is Cameron Young, 8-under, and Rory McIlroy, 6-under.

From The Irish Golf Course Guide:

From The West Australian, by Darren Walton, AAP:

Now that he's mastered the art of links golf, Cameron Smith hopes to parlay his best British Open start into a long overdue first Australian triumph at St Andrews in more than 60 years.

Smith fired a stylish five-under-par 67 on Thursday to sit three strokes shy of American leader Cameron Young after the first round of the marquee 150th Open.

Open favourite Rory McIlroy, with a 66, is the only other player in front of Smith, who has history on his side as he steps up his pursuit of an elusive maiden major following a third at this year's Masters and tie for 13th at the US PGA Championship.

Thirteen of the 14 champions at St Andrews since World War II have figured in the top 10 after round one, leaving Smith's countrymen Brad Kennedy (68) and Min Woo Lee (69) also well positioned for a run at the cherished Claret Jug.  Read more

From The Irish Examiner, by Scott Michaux, St Andrews:

There were cheers and boos and lots of birdies on a cool and gray morning that greeted the 150th Open Championship at the Old Course.

Cameron Young caught fire early in his Open debut, going out in 31 and reached 8-under after birdies at 11, 12 and 18 to shoot 8-under 64 – leaving him three clear of Cam Smith’s 5-under 67 early Thursday. Two-time Open champion Ernie Els was 5-under through the loop.

“Absolutely. I think it was nice to get out there this morning,” said Smith. “It's a little bit fresh this morning, but there wasn't much wind around for the first three or four holes. And just nice to get off to a good start. Couple of birdies in the first five there and really set the tone for the day.  Read more 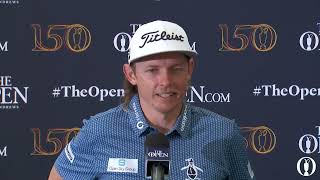