From the Belfast Telegraph, by Adam McKendry:

Michael Hoey celebrated the 10th anniversary of his victory at the Alfred Dunhill Links Championship by making history in claiming the Pro-Am team title alongside Maeve Danaher.

The 22-handicapper from Limerick is the first woman to win the team event, with the pair carding rounds of 62 at Kingsbarns, 67 at St Andrews and 63 at Carnoustie before closing with a 12-under par 60 on the Old Course yesterday.

That left them tied with former Australian cricketer Shane Warne and New Zealand professional Ryan Fox, but Hoey and Danaher triumphed due to their better score at St Andrews.

“Maeve was brilliant to play with,” said Hoey... Read more

From Golf Magic, by Ben Smith:

Interestingly Danahar, who plays her golf at Adare Manor in Ireland, plays lefty but putts right-handed. The icing on the cake was that she managed to beat her husband Gerry McManus, who played with Shane Lowry.   Read more 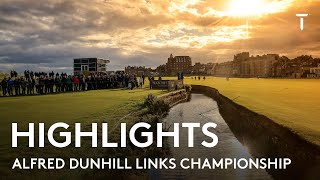