From LPGA News, by Amy Rogers:

The annual trip to Asia ushers in the second stage of the 2022 LPGA Tour season.

The Tour’s Asia swing comes on the heels of its three-week kick-off in Florida. Starting on March 3, the Tour will make its first stop in Singapore for the HSBC Women’s World Championship. The following week, the Tour heads to Thailand for the Honda LPGA Thailand.

And each event features its own storied history.

For more than a decade, the HSBC Women’s World Championship has been a fixture on the LPGA Tour schedule. Since 2008, the event has been played every single year, except for 2020 when the event was halted due to the coronavirus pandemic.

The winners in Singapore feature the who's who in the women’s game, dating back to the inaugural year when Lorena Ochoa won by an impressive 11 strokes over Annika Sorenstam. Both would go on to be inducted into the World Golf Hall of Fame.

Other big-name champions include former Rolex Ranking No.1 Jiyai Shin (2009), Hall of Famer Karrie Webb (2011), two-time champion Inbee Park (2015, 2017) and Michelle Wie (2018). But come tournament week, all eyes will be on the most recent winner, Hyo Joo Kim, who in 2021 edged out the field by a single shot with a final round 64 to capture her fourth career win on the LPGA Tour.  Read more 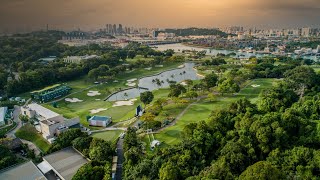