The field is now set for the 2022 Trust Golf Women’s Scottish Open with this year’s 144-woman field featuring 8 out of the world’s top 10 along with 22 major winners ready to battle it out on the links July 28-31, at Dundonald Links.

In the strongest line up to date, 30 countries are represented in the field, 45 LPGA winners with a haul of 194 titles and 28 Solheim Cup players with 74 appearances between them...

The Scottish Government and VisitScotland are strong supporters of women’s golf and have a long-standing commitment to the Women’s Scottish Open.  Read more

Next on the LPGA Tour is the Trust Golf Women’s Scottish Open at Dundonald Links in Ayrshire, Scotland.  Defending champion Ryann O’Toole and 2018 champion Ariya Jutanugarn are set to compete this week alongside seven of the top-10 players in the Rolex Rankings, including World No. 1 Jin Young Ko and No. 2 Minjee Lee.  TV Stream Times and more

From Golf Australia, The Preview, by Jimmy Emanuel:

The recent run of links golf on the professional stage continues this week as the LPGA and Ladies European Tours head to Scotland for the Women’s Scottish Open.

Despite falling between two majors, last week’s Evian Championship and next week’s AIG Women’s Open, a strong field heads to the Ayrshire coast as the best players in the game try and cram in some extra links golf before a historic event at Muirfield. Read more

From Golf Monthly, by James Hibbett:

The Trust Golf Women's Scottish Open, one of the most prestigious events on the LPGA circuit, gets underway this week at the famed Dundonald Links in Ayrshire with the strongest field in tournament history. 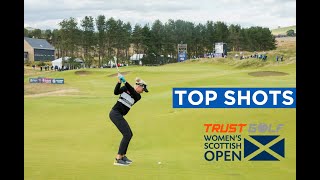