France’s Celine Boutier and New Zealand’s Lydia Ko are in a share of the lead on 15-under-par after 54 holes at the Trust Golf Women’s Scottish Open.

Two-time Solheim Cup winner Boutier fired a round of 67 (-5) and got off to a hot start with four birdies on her front nine.

The Frenchwoman’s only dropped shot of the day came at 12, but she soon bounced back with a birdie on 14 to reach 15-under. Read more

The weather was much better than expected on Moving Day at the Trust Golf Women’s Scottish Open and France’s Celine Boutier took full advantage of the slightly windy day in Ayrshire.

Boutier began the day four shots back of 36-hole leader Lydia Ko and fired a 5-under 67 on Saturday to hold a share of the lead with one round left to play at Dundonald Links. She carded five birdies on the front nine, including three straight on Nos. 5-7, and recorded one bogey and one birdie on the back nine to post a three-day total of 201, her third-lowest 54-hole total on the LPGA Tour.  Read more

Lydia Ko was joined by Celine Boutier at the top of the leaderboard after day three of the Women's Scottish Open on Saturday.

France's Boutier shot a 5-under-par 67 -- five birdies on the front nine -- to make up four shots on the New Zealander, who could manage only a 1-under 71. Ko offset three bogeys with a birdie finish at Dundonald Links.

Canada's Maude-Aimee Leblanc started and finished with birdies for a 66 which lifted her to second place alongside Germany's Leonie Harm on 14 under, one shot off the lead.  Read more

One key for Lydia Ko in holding onto a share of the 54-hole lead at the Women’s Scottish Open? Being an onion.

With Saturday’s forecast calling for colder temperatures, higher winds and some rain, Ko arrived at Dundonald Links well prepared. Like she had done the two previous days, Ko wore leggings under her golf pants. But for her third round, she took things a couple of steps further.

“I had four layers on at one point today,” Ko said.

That didn’t last long, though. With weather conditions turning out better than anticipated, the sun shining and temps warming into the low 60s, Ko was able to shed a couple of layers during her round.  Read more 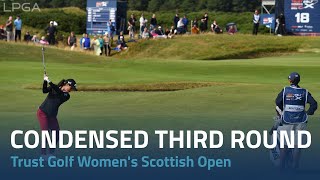