Korea’s Hye-Jin Choi fired a course record of 64 (-8) to lead the Trust Golf Women’s Scottish Open at the end of the first day at Dundonald Links.

The 22-year-old began her round with two pars before making a bogey on the third hole, but after that she found her rhythm and rolled in an eagle on the fifth.

Choi then made three consecutive birdies on holes seven through nine before adding four more on her back nine including on the 18th to reach eight-under-par.  Read more

Scotland’s Gemma Dryburgh called it the calmest Scottish Open she’s ever seen after her morning round.

The afternoon wave certainly couldn’t say the same after a storm dumped rain across Dundonald Links.

Rookie Hye-Jin Choi set the pace early in the day with her opening 8-under 64, holding a one-shot lead over Lydia Ko, Celine Boutier and Lilia Vu at the Trust Golf Women’s Scottish Open.

Georgia Hall and Narin An are two shots back. Choi, who said she doesn’t have many fond memories of links golf, made three birdies and an eagle over her last five holes.  Read more 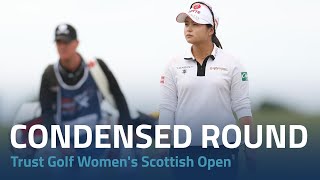