World number four Lydia Ko produced another bogey-free round of 65 to lead by two shots at the midway mark of the Trust Golf Women’s Scottish Open.

The New Zealander, who began her second round on the 10th tee, had a slower start only making one birdie on her front nine.

However, Ko had an excellent back nine with four birdies and an eagle to put her in pole position at Dundonald Links on 14-under-par...

Two shots behind Ko in second place is American Lilia Vu, who carded a round of 67 (-5) to reach a total of 12-under-par after 36 holes.  Read more

IRVINE, Scotland -- Lydia Ko shot a second straight 7-under 65 to lead by 2 strokes after two rounds of the Scottish Open on the LPGA Tour on Friday.

Ko, who finished strongly at the Evian Championship last week to tie for third place, has continued her good form in perfect conditions over the Dundonald Links and remains bogey-free heading into the weekend.

To start her back nine, from the first hole, the No. 4-ranked New Zealander had three birdies in four holes before making eagle at No. 5. She then birdied her last hole to move to 14 under overall.  Read more

Lydia Ko said she felt her second round Friday wasn’t as strong as her opening round on Thursday. Her score indicates otherwise.

Ko fired her second straight 7-under 65, taking a two-shot lead at 14 under following the second round of the Trust Golf Women’s Scottish Open. She leads Lilia Vu by two shots and Eun-Hee Ji by three heading to the weekend.

For Ko, who posted her tour-leading 12th bogey-free round of the season, she’s getting closer to conquering links golf. Last year, she finished tied for second at this event.  Read more 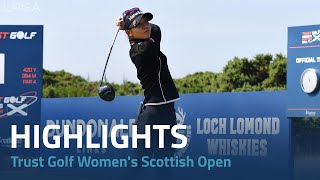