A cast of past and potential Champions will grace the fairways of Muirfield as the venue hosts the AIG Women's Open for the first time from August 4-7.

Anna Nordqvist will tee it up as the defending Champion, following her memorable success at Carnoustie in 2021. One of the most successful players of her generation with 13 professional victories including three major wins, the Swede is also one of only two golfers to have won the R&A Girls’ Amateur Championship, Women’s Amateur Championship and AIG Women’s Open, together with Georgia Hall.

For the first time in its illustrious history, Muirfield will play host to the world’s best female golfers, teeing up for the season’s final change at major glory.

The 2022 AIG Women’s Open will bring 144 talented golfers to the famed Muirfield links, home of the Honourable Company of Edinburgh Golfers, the world’s oldest golf club.   How to Watch, info - TV times and more

Last year’s AIG Women’s Open was a dream came true for Anna Nordqvist as she won her third Major title securing a one-shot victory at Carnoustie.

With her husband Kevin from just down the road, everything came together, and the Swede clinched the title she had dreamed about since she was little...

It is an historic week with Muirfield hosting the Championship for the first time – a golf course which is regularly rated among the top courses in the British Isles and top 20 in the world.  Read more

From the AIG Women's Open:

In 2022, the AIG Women's Open will be played at Muirfield for the very first time.

An historic golf course that has played an integral role in Championship golf, Muirfield will present a wonderful test for the game's greatest golfers.  Read more 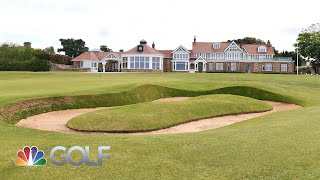