Hinako Shibuno exceeded her own expectations with a sensational 65 in the first round of the AIG Women’s Open at Muirfield.

On a breezy day when scoring was anticipated to be tricky, the Champion of 2019 stormed to the top of the leaderboard with the aid of eight birdies...

Shibuno’s previous AIG Women’s Open victory was achieved at Woburn, but she has found life tougher on links courses, missing the cut at Royal Troon and then tying for 34th at Carnoustie last year.  Read more

The top three players in the world spent the day making history together at Muirfield as the first women’s professional event ever held at the iconic links course got underway.

World No. 1 Jin Young Ko, No. 2 Minjee Lee and No. 3 Nelly Korda teed off in the afternoon local time at the 2022 AIG Women’s British Open, the final major of the year.

Two-time major winner Minjee Lee put up the best score in the group, a 3-under 68 that included a back-nine 32 and a chip-in on the 14th. Lee sits in a share of fifth, three shots back of leader Hinako Shibuno.  Read more

Hinako Shibuno produced a "frightening" display of putting to claim a narrow advantage at the AIG Women's Open at Muirfield, where Jessica Korda also impressed.

Shibuno, the 2019 champion, birdied her opening three holes and responded to a dropped shot at the par-three fourth by taking advantage of both par-fives on the front nine to reach the turn in 32.

The 23-year-old picked up a shot at the 11th and cancelled out a bogey at the 14th by posting back-to-back birdies from the 16th to close a six-under 65, giving her a one-shot advantage over Korda. Read more

From Belfast Telegraph, by Phil Casey:

Shibuno, who won her maiden major title at Woburn in 2019, made a flying start with birdies on the first three holes and went on to card eight in total in an opening six-under-par 65 in the £6million event.

That gave the 23-year-old from Japan a one-shot lead over American Jessica Korda, with Scotland’s Louise Duncan and Mexico’s Gabby Lopez another stroke back following a 67.  Read more 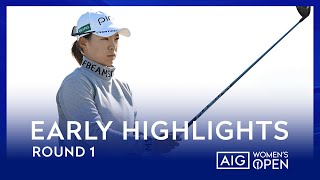