A super round of 66 from In Gee Chun propelled her to the top of the leaderboard at the AIG Women’s Open, with Ashleigh Buhai and Madelene Sagstrom just a shot back after a frenzied second day at Muirfield.

Earlier on Friday, it had seemed that four-under-par may be enough for a share of the lead but Chun had other ideas, shooting four birdies on the back nine, three of which came on the toughest stretch of holes, to make it to eight-under...

At one stage there was an eight-way tie at the top and 32 players within three shots of the lead, before Buhai and Chun raced clear of the chasing pack.  Read more

Yet again, In Gee Chun is making her presence known at a major championship.

Chun, who won the KPMG Women’s PGA Championship at Congressional Country Club in June, carded a 5-under 66 on Friday at the AIG Women’s Open and vaulted to the top of the leaderboard. Her six birdies included a 20-footer that hung up on the lip at No. 13, sitting there for a few seconds before falling in, much to the delight of the Scottish fans.  Read more

Korea’s In Gee Chun produced a round of 66 (-5) to climb to the top of the leaderboard at the halfway stage of the AIG Women’s Open.

The three-time Major champion made the most of the afternoon conditions making two birdies and one bogey on her front nine before rolling in four birdies on her back nine to reach a total of eight-under-par.  Read more

From Independent.ie, by Phil Casey:

South Korea’s In Gee Chun has a fourth major title – and second of the season – in her sights after claiming the halfway lead in the £6million AIG Women’s Open.

Chun, who won the Women’s PGA Championship at Congressional in June despite consecutive weekend rounds of 75, carded six birdies and a solitary bogey in a second round of 66 at Muirfield.

That gave the 27-year-old a halfway total of eight under par and a one-shot lead over South Africa’s Ashleigh Buhai and Sweden’s Madelene Sagstrom, with seven-time major winner Inbee Park a shot further back.  Read more 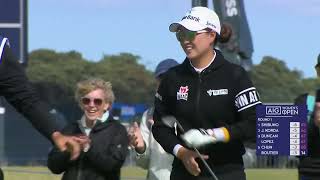