From The Scotsman, by Martin Dempster:

A leading American golf writer was “muscled out” of a Phil Mickelson press conference on an eventful first day for Greg Norman’s Saudi-backed LIV Golf series.

Alan Shipnuck did the interview with six-time major winner Mickelson earlier in the year that included him coming out with comments about the Saudis being “scary motherf******”.

Shipnuck, who covered golf for 25 years for Sports Illustrated and is now a partner at the Fire Pit Collective, flew to England at the last minute for the $25million event at Centurion Club north of London.

He initially said that his request for accreditation hadn’t been acknowledged by the tournament organisers but was granted a press pass on his arrival.

“Haven’t laid eyes on him since last year,” said Shipnuck of Mickelson in a tweet before the first-day action got under way. “I’ve been informed by tournament officials he doesn’t wish to speak to me; we’ll see how it goes post-round.”  Read more

From The Big Lead, by Ryan Phillips:

The LIV golf tour began its first event on Thursday and there was plenty to discuss. While things have been crazy all around, one reporter's run-in with security in the press room is among the most noteworthy things to happen. Alan Shipnuck was removed from Phil Mickelson's press conference by security. And LIV CEO Greg Norman watched the whole thing, then pretended like he didn't know it had happened.

In case you don't remember, Shipnuck is the writer who reported on Mickelson's reprehensible comments essentially excusing Saudi Arabia's human rights abuses. Mickelson was obviously not happy those comments were made public. We don't know who specifically had Shipnuck removed, but he was escorted out during Mickelson's press conference.  Read more 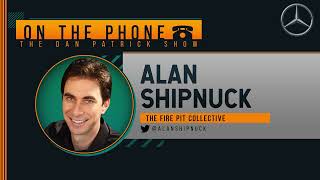