"All the money in the world" wouldn't change his mind: Will Zalatoris

Calling the PGA Tour the best tour in the world and saying the golf world needed to "let the dust settle," up-and-comer Will Zalatoris reaffirmed his commitment to the PGA over the LIV Golf Invitational Series on Tuesday.

Zalatoris discussed the fact that even if LIV players are not banned from majors, it will become immensely harder for younger LIV players to qualify as they miss out on chances to accrue Official World Golf Rankings points. The OWGR is one factor in determining who qualifies for the four majors.

For Zalatoris -- and likely many others -- major titles are the ultimate goal, not prize money.

"If you gave me all the money in the world tomorrow, I'd still be doing the exact same thing," Zalatoris said ahead of this week's Rocket Mortgage Classic in Detroit. "Like I said, I've wanted to win a major my entire life and I've wanted to play out here."  Read more

[Zalatoris is] still being asked questions about LIV, but this time it’s about the potential distraction the newly-born league is causing.

“I’m a Player Advisory Council member, so we talk about it internally a lot,” he said Tuesday ahead of this week’s Rocket Mortgage Classic at Detroit Golf Club. “It’s a wild time for the PGA Tour and I guess golf as a whole, but the changes that I think are going to happen and everything that’s going to come down the road is only going to make us stronger.”

“And we are the best tour. Every week we’re playing the best courses on the planet…I just think that just let time come and let everything kind of settle and it will be very clear."  Read more 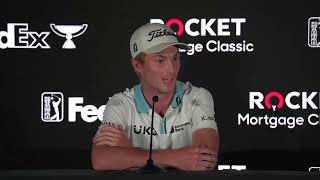