As Minjee Lee hoisted the silver trophy at the 2021 Amundi Evian Championship, she did not know that the victory would open the proverbial floodgates.  With a final-round 64 and a two-putt playoff birdie that clinched her first major title, Lee began a streak of what she says is some of the best golf of her illustrious career...

Since Lee’s victory in Evian-les-Bains, she has notched 13 top-20 finishes, including a win at the Cognizant Founders Cup and her second major title in June at the U.S. Women's Open presented by ProMedica, and has soared to No. 2 in the Rolex Women's World Golf Rankings. The 26-year-old Australian enters the week with a combined score to par in the 2022 majors of -24, 13 shots better than any other player.  Read more

Rolex Rankings 23 Céline Boutier will be seeking home glory this week as she looks to become the first French winner of The Amundi Evian Championship, played at Evian Resort Golf Club in Evian-les-Bains, France.

The 28-year-old from Montrouge is happy to be playing in front of her parents, Christopher and Jacqueline, as well as her twin sister, Christie, this week.  Read more

Minjee Lee, where will she stop?

Just imagine: since August 2021 and her difficult week a few days prior to her win at The Amundi Evian Championship, Minjee Lee has not missed one cut. Even better, her least favourable finish remains an honorable 25th place at the Cognizant Founders Cup 2021.  Needless to say that she’s not heading to Evian to make up the numbers and intends on  giving herself every chance of holding onto her title.  Since her victory in Haute-Savoie (France) last year, she has always achieved a Top 12 finish at the Majors.  It would seem that her first Grand Slam win has given her wings, and now it’s up to her to take care of them if she wants to fly again at this event, which will always have a special place in her heart.  In the place where it all began.  Full article here

Minjee Lee's Evian Championship victory in 2021 wasn't just impressive, it was about as unlikely as you can get. Matt Cooper reflects on just how mindblowing the Australian's achievement was.  Read more

See also, The Aussies at Evian, from Golf Australia by Jimmy Emanuel 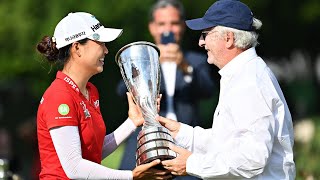