The Andalucia Masters on the European Tour was first held in 2010 at the Valderrama. In 2019 it was added to the Open Qualifying Series, giving up to three players entry into The Open Championship. Sergio Garcia has won the tournament three times, in 2011, 2017 and 2018. American John Catlin is this year's defending champion. That 2020 win was Catlin's first on the European Tour, followed three weeks later by his win of the Irish Open. Then in April this year he won the bitterly cold Austrian Open after a five hole playoff against Max Kieffer.

Before the Andalucia Masters got underway this year, some of the golfers joined volunteers in helping to clean up Sotogrande beach, as part of the European Tour's Green Drive initiative.

From the European Tour News, Five Things to Know:

The Estrella Damm N.A. Andalucía Masters is the second of three consecutive events to take place in Spain this October, and follows on from Rafa Cabrera Bello’s victory in front of home fans at the Open de España.

This week, American John Catlin will attempt to defend the title he captured in Valderrama last season, before the Mallorca Golf Open rounds of the trio events for the European Tour by returning to Golf Santa Ponsa for the first time this century.  Read more 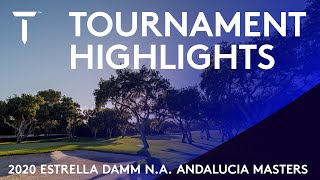