[Matt Jones], holing out for eagle on the 13th, making a 4-foot eagle putt on the 15th and holing a 50-foot birdie putt on the 17th. A final birdie allowed Jones to post the third score of 61 — Justin Thomas also tied the record on Saturday — to finish third.

Jones was at 32-under 260, one shot better than the previous record, two shots short of winning.  Read more

From Golf Channel, by Ryan Lavner:

In the last 61 years, only three players reached 30 under par or better in a PGA Tour event.

A tip of the cap, first, to Jones, who shot 123 on the weekend to surge into the mix. His 23-under total to close out the week was the lowest 36-hole score to par in Tour history.  Read more

Even though Matt Jones didn't come away with the win at Kapalua, he didn't leave Maui empty-handed.

The 41-year-old Aussie followed up a Saturday 62 by tying the Plantation Course record with a final-round, 12-under 61. Those consecutive rounds accumulated to a 23-under weekend, which not only sealed a third-place finish for Jones but also marked the lowest 36-hole score in relation to par in PGA Tour history, topping Steve Stricker's 21 under (61-62) at the 2009 Bob Hope Classic.

The [TOC] result catapulted Smith to 10th in the Official World Golf Ranking, his first appearance inside the top 10, and to third in the FedExCup. He now must reset some of his season goals, having already met them.  Read more 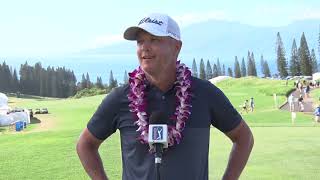