The tournament that is now the AT&T Byron Nelson was first held in 1944, then as the Texas Victory Open. That tournament was won by American professional Byron Nelson. The following year it became the Dallas Open and thereafter Dallas was central to its name through to 1968 (with the exception of 1956 when it was the Texas International for one event).  In 1968 it took the name of the first tournament winner, Byron Nelson, becoming the only tournament to carry the name of a golfing professional through until 2007, when the Bay Hill Invitational became the Arnold Palmer Invitational.

Born in 1912, Byron Nelson won 11 consecutive golf tournaments, 18 in all, through 1945. He retired officially the following year and became a commentator. He won 52 career events, and received many high awards.

Over the years the tournament has had a number of different sponsors and has been played on various courses. Storms and weather events have impacted the game at times and have contributed to the course moves.  AT&T became the sponsor in 2015, and in 2018 and '19 it was held at the Trinity Forest Golf Club just south of Dallas. Now in 2021 it is being held for the first time at TPC Craig Ranch at McKinney, about 50 km north of Dallas.

Australians who have won this tournament in recent years are Adam Scott in 2008, Jason Day in 2010 and Steven Bowditch in 2015.  Jason Day was also runner-up in 2017 (to Billy Horschel), as was Marc Leishman in 2018, to Aaron Wise.  In 2018 Leishman led from the first round when he was just a stroke off the record.  He broke the 36 hole record to share the lead into the final. However Wise broke a record as well, with a 23-under-par win.

Defending champion in 2021 is Kang Sung-hoon from Korea. In 2019 Kang equalled Wise's 23-under and won by two strokes. He is returning to defend his title.  This year's Masters winner, Hideki Matsuyama, will be in the field, as will Bryson DeChambeau, Jon Rahm, Jordan Spieth and Brooks Koepka.

At this PGA TOUR link are many options for following the tournament, including TV, radio, live audio, TOURCast, and the PGA TOUR app, TOUR Pulse, and more. 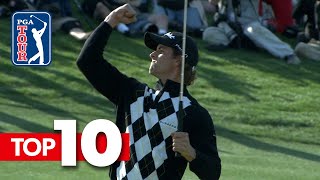