From PGA Australia, by Martin Blake:

Local boy Jed Morgan has made a sensational run to the top of the leaderboard at the Fortinet Australian PGA Championship at Royal Queensland today.

Morgan, 21, a five-year member at Royal Queensland who won the 2020 Men’s Australian Amateur at this venue, started early at the 10th tee and rolled in four birdies on the back nine. Read more

From The West Australian, by Murray Wenzell, AAP:

Regular chats with Ricky Ponting and a fishing trip with world No.10 Cameron Smith have steeled Jed Morgan as the Australian PGA leader eyes the title.

On his home Royal Queensland GC track, the newly turned professional shot an eight-under 63 - a course record for the newly designed layout - to finish 14-under on Friday.

The 21-year-old led by a staggering six shots midway through the day as overnight pacesetter Louis Dobbelaar endured an even-par round to remain seven-under. Read more

They breed them tough north of the border, and in hot and humid conditions at Royal Queensland on Friday there was none tougher than former Australian Amateur winner Jed Morgan.

The 22-year-old Royal Queensland member torched the Mike Clayton layout and the rest of the Fortinet Australian PGA Championship field on his way to a course record 63 early on the second day. His eight-under round taking him to 14-under for the tournament and six shots clear of Andrew Dodt in second. Read more

Royal Queensland member and new professional Jed Morgan had a day out on Friday of the Fortinet Australian PGA Championship. The local lad firing a course record 63 to likely hold the lead at the end of 36 holes. Here [linked] is what he had in the bag.

A video blast from the past: Cam Smith welcomes Jed Morgan and Louis Dobbelaar to Florida in 2018 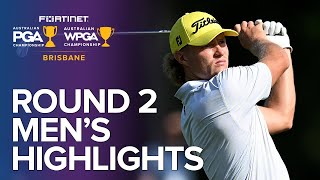