Aussies Katherine Kirk and Sarah Jane Smith are high on the leaderboard at the end of Day One at the Pure Silk Bahamas LPGA Classic 2018.  Canada's Brooke Henderson is currently at No. 1.

Sarah Jane Smith is in 2nd place tied with Luna Sobron Galmes (Spain) on 69,  while Katherine is tied 4th with world No. 1 Shanshan Feng (China),  and several others.

In difficult conditions where the continuous winds were "brutal", Katherine shot a 3-under-par 70.   Average wind speeds were 18 - 26 mph with squalls of up to 35 mph.

"Unless you've lived in the Bahamas there's probably nothing that can prepare you," she said, in reply to questions about those rather ferocious winds.

Shanshan Feng was a first timer at the Bahamas and she, too, found the gales unsettling.  "Is this normal?" she asked.  She had arrived earlier in the week to practice, and those days had been calm.

Shanshan is very well liked among the other players, in particular due to her relaxed approach to the game. "It literally looks like she's just out there having a walk in the park, and I can accept in between that she's hitting these amazing golf shots, and that's really why I love her so much. She doesn't really fit the mould of your typical No. 1." Tiffany Joh's comment was one of several, all with the same warm note.

Michelle Wie (US) made a beautiful eagle on the 11th hole.

Another player of note is 22 year old Maria Torres, who finished 3-under 70.  Maria had just received her PGA Tour card in December '17.

The video at top of page covers highlights from Katherine Kirk's first round. 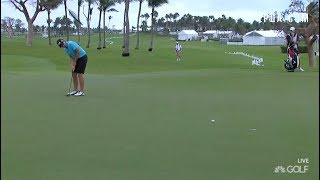