LPGA Tour rookie Ayaka Furue came to play on Sunday at the Trust Golf Women’s Scottish Open, ultimately claiming her first LPGA Tour title after firing a course-record, bogey-free, 10-under 62 in the final round.

Furue began the day four shots back of 54-hole co-leaders Celine Boutier and Lydia Ko at -11. She made six birdies in a row from holes six through eleven to tie the lead with Boutier, and after the Frenchwoman bogeyed No. 13 and Furue birdied No. 15, the 22-year-old Japan native held the solo lead at -19 with three to play.  Read more

The 22-year-old began the day in a tie for ninth place, five shots behind the leading duo, but started her day with a birdie on the first.

After a run of four pars, Furue kicked into top gear rolling in six birdies in-a-row from holes six through to 11 to put herself in clear contention.

Another birdie on 15 put the seven-time JLPGA winner in front and back-to-back birdies on the last two holes sealed victory on 21-under-par in Furue’s first appearance at the Trust Golf Women’s Scottish Open.  Read more

Japan's Ayaka Furue carded a stunning final round of 62 to win the Trust Golf Women's Scottish Open at Dundonald Links.

Furue started the day four shots off the lead shared by Lydia Ko and Celine Boutier, but fired 10 birdies - including six in a row from the sixth - to secure victory in an event co-sanctioned by the LPGA and Ladies European Tour.

The 22-year-old, who was still an amateur when she won the first of her seven titles on the LPGA of Japan Tour in 2019, finished 21-under-par and three shots clear of Boutier, who secured solo second with a birdie on the 18th in her 69.  Read more

Furue torched Dundonald Links on Sunday in Ayrshire, Scotland, firing a course record and tournament record of 10-under 62 to overcome a four-stroke deficit and capture her first LPGA victory. Japan’s newest LPGA winner finished at 21 under, three shots better than Celine Boutier, who was tied for the 54-hole lead with Lydia Ko.  Read more 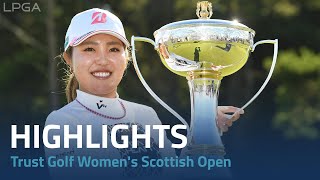