Day One at Shadow Creek: Minjee Lee starts fast, in "a day of upsets"

The first day of the 2022 Bank of Hope LPGA Match-Play presented by MGM Rewards brought competition almost as hot as the triple-digit weather. Shadow Creek, one of the most exclusive tracks in the United States, served as a stern test for 64 of the world’s greatest female golfers.

No. 61 Kelly Tan made a massive splash in her first-ever match-play tournament, never trailing in a 7-and-5 victory over No. 4 Danielle Kang. Tan won six consecutive holes from 5-10, building a 7-up lead over the American Solheim Cup star, who has been battling a back injury for the last month.  Read more

Minjee Lee, coming off a seventh US LPGA title at the Founders Cup, launched her LPGA Match-Play campaign with a 6&5 victory over Chun Young-in at Shadow Creek in Las Vegas, Nevada, on Wednesday.

Australia's Lee, ranked fourth in the world and the top seed in the 64-strong field, seized control with back-to-back birdies to win the third and fourth holes. She birdied six and seven and eagled the ninth before winning the 10th and 11th with pars.  Read more

From Golf Australia, by Reuters:

Less than a fortnight after her first LPGA Tour victory of 2022, top-seed Minjee Lee has continued her hot form with a crushing win in her opening Match Play clash at Shadow Creek Golf Course.

The 25-year-old Australian routed South Korea's Youngin Chun 6&5 on Wednesday in Group 1, carding birdies to win seven of their first 11 holes, before dropping a hole before halving No.13 to seal the match.  Read more

From The Golf News Net:

The 2022 Bank of Hope LPGA Match Play format is unique in golf because it's not only the rare match-play event in professional golf, but it's an individual match-play event with a round-robin group component designed to help preserve the best players in the tournament from being eliminated in a potential fluke loss in the first three days of the event.

The Bank of Hope LPGA Match Play format is similar to that of the WGC-Dell Technologies Match Play, with a 64-player event beginning with 16 groups of round-robin play leading to 16 group winners who advance into a single-elimination, bracket-style tournament to determine a winner.  Read more

Round Robin, Day One Leaderboard 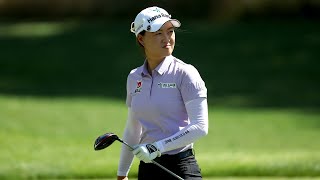