Thomas Pieters carded a gutsy 68 to win his fifth European Tour title at the 2021 Portugal Masters after a dramatic afternoon at Dom Pedro Victoria Golf Course.

The big hitting Belgian entered the day in a share of the lead with Frenchman Matthieu Pavon and the duo played out an enthralling battle right to the last in Vilamoura.

Pavon was in cruise control over the first 11 holes but found water three times on the way home in a 70 and Pieters took advantage.

The 29-year-old finished at 19 under, two shots clear of Pavon and Danish pair Lucas Bjerregaard and Nicolai Højgaard, who finished with rounds of 66 and 64 respectively.  Read more

Former Ryder Cup star Thomas Pieters held his nerve on a chaotic afternoon in Vilamoura to card a closing 68 and win the Portugal Masters.

The Belgian started the final day sharing a four-shot lead with Matthieu Pavon but found himself two back with seven holes to play as the Frenchman looked serene in search of a first European Tour win.

It was all change on the par-five 12th, however, as Pavon put two balls in the water en route to a triple-bogey... Read more

Thomas Pieters shot a 3-under 68 in the final round to win the Portugal Masters for his first European Tour victory since 2019 on Sunday.

The Belgian ended at 19 under for the tournament (265) at the Dom Pedro Victoria Golf Course, two shots ahead of Frenchman Matthieu Pavon and Danish players Nicolai Hojgaard and Lucas Bjerregaard.

It was Pieters’ fifth European Tour win in 171 starts. His last victory had come two years ago at the Czech Masters.  Read more 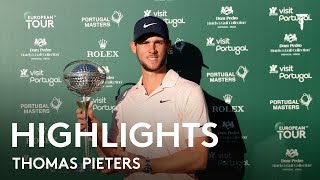