Viktor Hovland was on course to become the first Norwegian winner in European Tour history after a brilliant 64 handed him a three shot lead heading into the final round of the 2021 BMW International Open.

The World Number 14 carded a 68 on day one despite finding the water three times and since then he has not looked back, adding a 67 and his bogey free effort in round three to get to 17 under at Golfclub München Eichenried.  Read more

Viktor looked likely to live up to his name, Campillo was on the comeback trail, shots were going in from everywhere and we saw a very rare bird indeed on day three of the 2021 BMW International Open.

Here is everything you need to know from Saturday in Bavaria.

Viktor Hovland is on course to become the first Norwegian winner in European Tour history after a brilliant 64 handed him a three shot lead. The 23-year-old joined the leading group on the sixth, kept pace with birdies on the ninth and 11th and then applied the burners to get to 17 under.  Read more

Vincent Normann will not forget his debut as a professional in a hurry after the Swede achieved the rare feat of an albatross hole-in-one at the 270-yard, par-four 16th on day three of the BMW International Open

Vincent Norrman celebrated his professional debut with a spectacular albatross hole-in-one in the third round of the BMW International Open in Munich.

Normann drilled a perfect three-wood off the tee at the inviting 270-yard, par-four 16th, his ball not only finding the green but rolling straight into the hole... Read more

From Yahoo!Sports, by Tim Schmitt:

Using a string of five birdies on the back nine, Viktor Hovland threatened to run away with the BMW International Open on Saturday, marking an impressive performance in just his second start on the European Tour.

Ryder Cup hopeful Viktor Hovland has taken control of the BMW International Open, his brilliant, bogey-free 64 on day three giving him a three-shot lead going into the final round.

The World No.14 is looking for a maiden European Tour victory on Sunday to further cement his place as part of Padraig Harrington's European team.  Read more 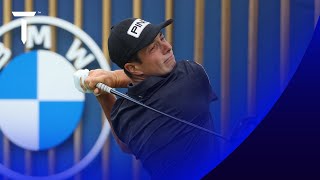